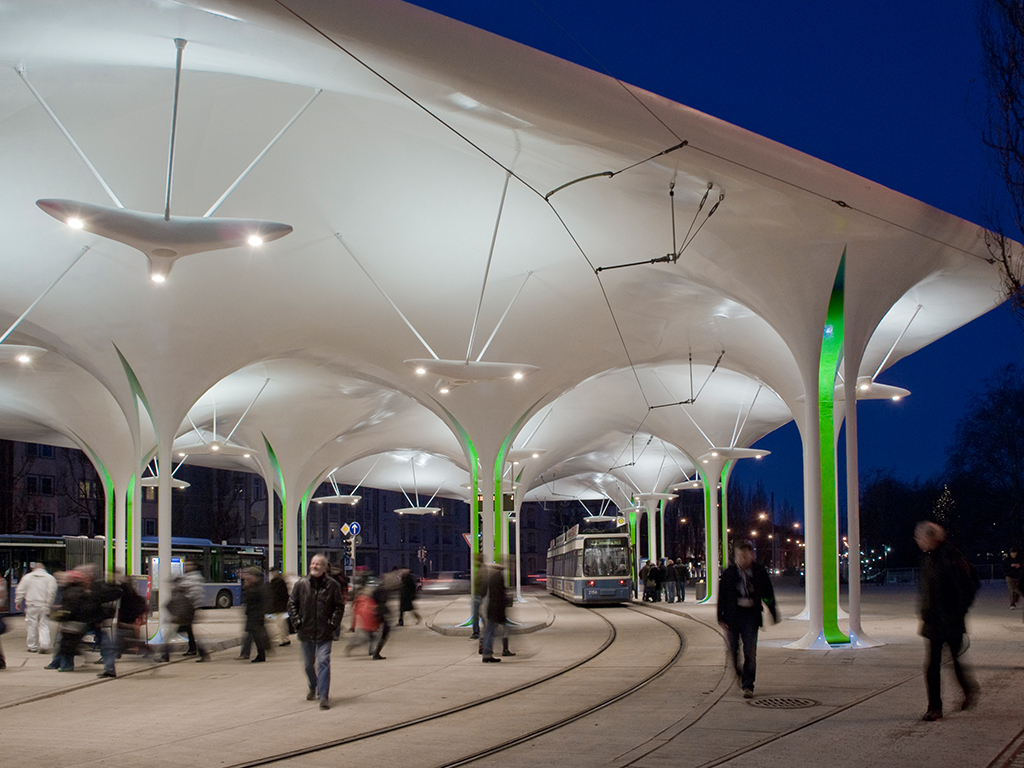 The former bus station "Münchner Freiheit" has given way to a spectacular construction, prominently visible from afar and forming the center of a newly designed square.

Strolling along the Leopoldstraße in Munich's Schwabing district, you will inevitably happen upon the tram station "Münchner Freiheit", a softly curved roof construction, supported by 18 slim columns.

The vaulted creation is supported by white colored, goblet-shaped columns morphing into the roof and shimmering green from within, thus creating an almost floral impression of the open hall, the complete setting perfectly associated with the surrounding forestall greenery and contrasting most amicably with the architectural environment.

An architectural competition, initiated in the year 2003 by the Munich municipal utilities company, was won by the OX2 architectural office of Aachen and led to the new design of the square.

The original planning, including a roof construction made of glass-fibre reinforced plastics, had to be reviewed by the Munich municipal utilities due to static and fire-protection restrictions. After a thorough re-planning, carried out by the Munich-located architectural bureau RPM, the new column-supported green-white 400-ton steel construction shows to great effect the lightness and livelihood of the new creation in spite of its immense weight. The roof, spanning 73 by 31 meters, was completed within three months after extensive subterrestrial works

Topped by goblet-like capitals, composed of three segments each, the 18 delicate columns bear the approx. 200 tons of the tram station's roof that comprises a total of 15 kilometers of electric cables and supply lines.

The roof's vaulted ceiling serves as a reflector for the suspended lighting elements that include loudspeakers for public announcements. For perfect night-staging, each of the columns was equipped with one internally-mounted low-beaming LED-downlight tectum m. State-of-the art LED technology ensures maximum energy efficiency and appealing aesthetics. All metal components of the lighting elements were manufactured in the same color as the inner column surfaces, ensuring seamless integration into the impressive construction. The 6,500 Kelvin color temperature of the lamps adds to the columns' shimmering brilliance. During times of daylight, star-shaped orifices above the column capitals provide agreeable illumination.

Most impressively, the brightness of the perfectly balanced light reflexes on all of the roof's surfaces can be directly adjusted by the internal bus control system, providing a floating illusion of the roof construction and emphasizing the delicacy of the architecture. 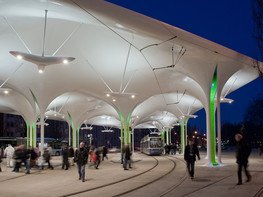 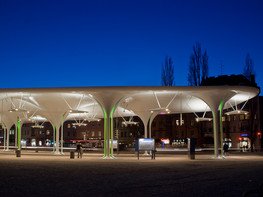 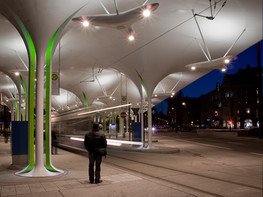 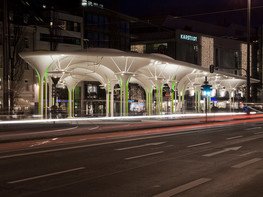 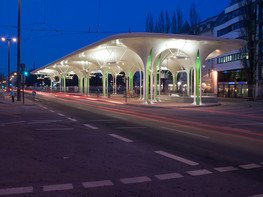 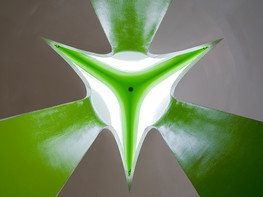 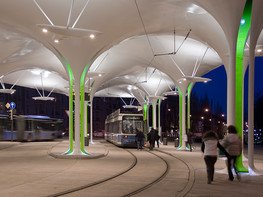 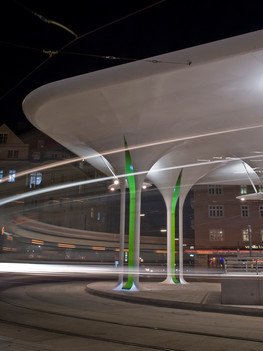 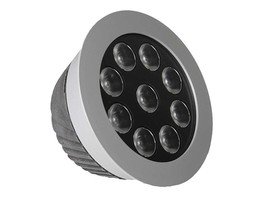